March 26 marks one year since the FTC reopened its investigation into Facebook.
It's time for the FTC to #EnforceTheOrder.

On March 26, 2018, the Federal Trade Commission announced it would reopen the investigation of Facebook's business practices.

The announcement follows numerous violations of the 2011 consent order, including the Cambridge Analytica breach.

It's Not Just Cambridge Analytica...

What the Experts Are Saying

Fines Are Not Enough

Fines are not enough - the FTC must require changes in business practices like reforming hiring practices, installing a director to represent users, and unwinding the WhatsApp and Instagram mergers.

A recent Pew study found that 80% of social media users said they were concerned about advertisers and businesses accessing their data, and 64% said the government should do more to regulate social media companies.

FTC Has Failed To Act

The FTC has not taken a single enforcement action against Facebook since the 2011 consent order.

The FTC Must Act Now

The FTC must act before the one-year anniversary of the announcement.

We need to let the FTC to know enforcement matters!

This is how you can help:

Need some help with language? Feel free to use the Tweets below: 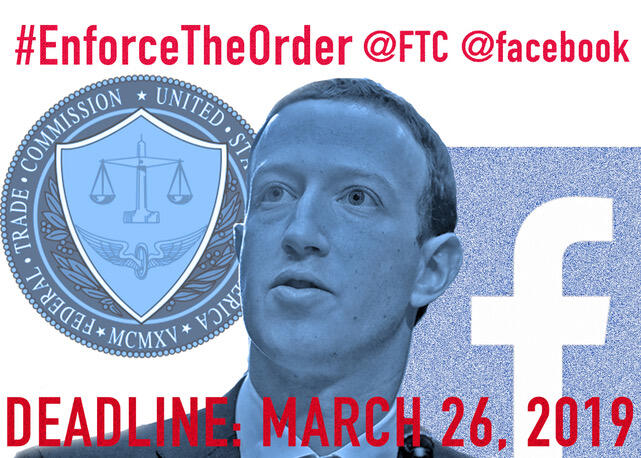 Want to see what happens with this campaign and stay involved with all the work we do?